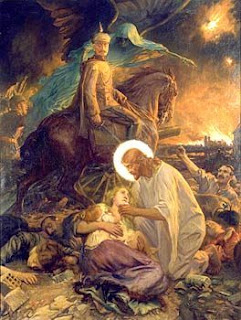 Charles Ernest Butler, born in 1864 at St Leonards on Sea, Sussex, UK, was a portrait and landscape painter. He also painted mythological and other figure subjects.

Charles studied at St Johns Wood School of Art and also attended  Royal Academy schools. Charles exhibited his work at The Royal Academy (R.A.) in London, The London Salon and the Walker Art Gallery, Liverpool. He died in 1933.

His painting “Blood and Iron”, painted in 1916 was exhibited at the Royal Academy. The painting depicts Kaiser Wilhelm II on horseback, followed by his army. He is turning back and looking indifferently at the civilian victims at his feet. Hovering behind the Kaiser, the Angel of Death urges him along his path of destruction. In the background, a city — thought to be Louvain, in Belgium — is ablaze. In the foreground, Christ is helping the fallen.

Blood and Iron (German: Blut und Eisen) is the name given to a speech made by Otto von Bismarck on 30th September 1862, when he was Minister President of Prussia.