A post by Chris Dubbs on the Facebook Page Artists of the First World War led me to research Francis Edgar Dodd. 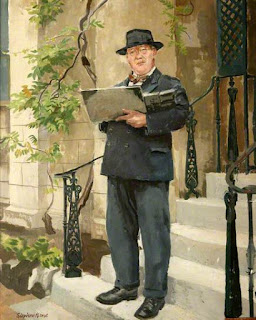 Francis studied art at the Glasgow School of Art, where a fellow student was Muirhead Bone, who married Francis’s sister Gertrude Helena. In 1893, while studying in Glasgow, Francis won the Haldane Scholarship, awarded by the Trustees at the School  for travel. That enabled  him to study art in France, Italy and later Spain.  Francis returned to Britain in 1895, where he lived in Manchester, before moving to Blackheath in London in 1904. While in Manchester, Francis became friendly with Charles Holden, the architect.

In 1916, Francis was appointed official war artist by Charles Masterman, the Head of the War Propaganda Bureau (WPB), replacing Muirhead Bone.    He served on the Western Front and painted over thirty portraits of senior military personnel.  On 5th June 1918, Francis joined the Royal Navy.

Francis was appointed a Trustee of the Tate Gallery in 1929, a position he held for six years. He was elected  an Associate Member of the Royal Academy in 1927 and a full Member in 1935.

After the death of his first wife, Francis married Ellen Margaret Tanner in March 1949.  Ellen was the model for his painting “Lady in Black”.  Francis died at his home in Blackheath on 7th March 1949. 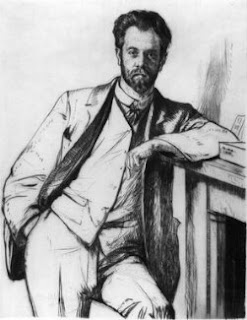 During the First World War, Margaret Holden joined the "Friends' Emergency Committee for the Assistance of Germans, Austrians and Hungarians in distress" which helped refugees of those countries stranded in London by the conflict. Charles Holden served with the Red Cross's London Ambulance Column as a stretcher-bearer transferring wounded troops from London's stations to its hospitals. Holden also served on the fire watch at St Paul's Cathedral between 1915 and 1917.

On 3 October 1917, Holden was appointed a temporary lieutenant with the army's Directorate of Graves Registration and Enquiries. He travelled to the Western Front for the first time later that month and began planning new cemeteries and expanding existing ones.

Charles described what he saw: “The country is one vast wilderness, blasted out of recognition where once villages & orchards & fertile land, now tossed about & churned in hopeless disorder with never a landmark as far as the eye can reach & dotted about in the scrub and untidiness of it all are to be seen here & there singly & in groups little white crosses marking the place where men have fallen and been buried.”

In September 1918, Charles transferred to the Imperial War Graves Commission (now called the Commonwealth War Graves Commission) with the rank of Major. From 1918 until 1928 he worked on 69 Commission cemeteries, initially, managing the drawing office and working as the senior design architect under the three principal architects in France and Belgium - Edwin Lutyens, Reginald Blomfield and Herbert Baker

In 1920, he was promoted to be the fourth principal architect. His work for the Commission included memorials to the New Zealand missing dead at Messines Ridge British Cemetery, and the Buttes New British Cemetery at Zonnebeke.

In 1922, Holden designed the War Memorial Gateway for Clifton College, Bristol, using a combination of limestone and gritstone to match the Gothic style of the school's buildings.

Portrait of Charles Holden by his friend the artist Francis Edgar Dodd. 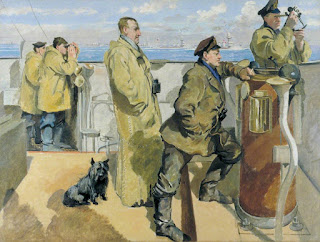 Philip Connard was born in Southport, Lancashire, UK, on 24th March 1875.  He left school to go out to work as a house decorator, enrolling to study art at evening classes.  Philip won a scholarship to study at the Royal College of Art in London.   After a brief period in France, he returned to London and worked as an illustrator, before taking  up a teaching post at Lambeth School of Art.

During the First World War, Philip volunteered and joined the Royal Field Artillery as a Gunner (Private).  He was posted to France, where he took part in several actions before being sent home suffering from Shell Shock.  By then, he had attained the rank of Captain.

Appointed as an official war artist by the Royal Navy, Philip painted the surrender of the German ship SMS “Goeben” and “St George's Day: Bridge of HMS 'Canterbury', on Patrol Work when the Great Naval Raid on Zeebrugge and Ostend Took Place” on 23rd April 1918.

Philip never forgot his roots, founding The Southport Palette Club in 1921 in order to hold annual exhibitions of the work of local artists. He was President of the Club until his death on 8th December 1958.

With thanks to Historian Debbie Cameron for posting this painting on Artists of the First World War Facebook Group Page.