With thanks to Catherine Avak for finding this artist for us

Born in Murree, Bengal, India on 5th August 1870, Leslie was educated in England before going up to Oxford University, where he studied law in Corpus Christi College.  He became a barrister and solicitor.  In 1895, Leslie travelled to Tasmania. He married Emily Josephine Lacy in Hobart, Tasmania on 30th March 1896.  The couple lived in Davey Street, Denison, South Hobart.
Leslie joined the AIF 8th Australian Light Horse Regiment with the rank of Captain in Gallipoli on 26th May 1915. Wounded during the battle of the Nek on 7th August 1915, by then Major Hore, he rejoined his unit on the 28th September 1915.
Leslie then accepted the post of Brigade Machine Gun Officer of the 6th Infantry Brigade in France.
Leslie was awarded the Military Cross on 18th June 1916 at Pozieres.  His final rank was Temporary Lieutenant Colonel with the Australian Machine Gun Corps.   On 7th November 1917, Leslie was Mentioned in Despatches.  He returned to Tasmania in February 1919.
Leslie died in Kavieng district of New Ireland, Papua New Guinea on 1st September 1935.  His occupation was listed as planter.
Catherine Avak posted the above image on Facebook -
Rupert Brooke Remembered added a new photo to the album World War I.
“Early Morning Gallipoli” Suvla Bay October 1915” by Captain Leslie Hore
and also on the Artists of the First World War Facebook page.
Catherine says: "You can find more drawings of the Gallipoli campaign, which I found to have more immediacy than any photographs I’ve seen, as well as further information about the artist at": https://artsandculture.google.com/story/fgXB7Y5BQBwHJg
The Battle of the Nek (Turkish: Kılıçbayır Muharebesi) took place on 7th August 1915, during the Gallipoli campaign of The First World War. "The Nek" was a narrow stretch of ridge on the Gallipoli Peninsula. The name derives from the Afrikaans word for a "mountain pass" but the terrain itself was a perfect bottleneck and easy to defend, as demonstrated during an Ottoman attack in June. It connected Australian and New Zealand trenches on the ridge known as "Russell's Top" to the knoll called "Baby 700" on which the Ottoman defenders were entrenched.
Posted by Lucy at 9:28 AM 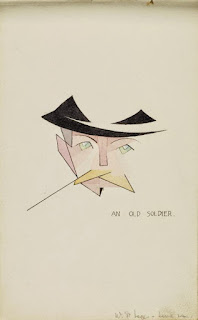 "An Old Soldier" by Herbert Read.
Herbert was born in Kirbymoorside, North Riding of Yorkshire, UK on 4th December 1893.  His parents were Herbert Edward Read, a farmer, and his wife, Eliza, nee Strickland.

Herbert was studying at the University of Leeds when the First World War began. He was commissioned in January 1915 into the Green Howards Regiment and was awarded the Military Cross in 1917 and the Distinguished Service Order in 1918.  His final rank was Captain.

During the First World War, Herbert served in France.  He also founded the magazine “Arts & Letters” with Frank Rutter.

On 11th November 1985, Herbert Read was among 16 of the Great War poets commemorated on a slate stone unveiled in Westminster Abbey in London, UK.  The area is known as Poet's Corner.

Charles Hoffbauer was born in Paris.  His parents, Féodor Hubert Hoffbauer, a well-known archeologist, architect and artist, and Marie Clemence Belloc Hoffbauer, were from Alsace. Following his initial education in French schools, Charles attended the École des Beaux-Arts in Paris for three years.

Charles first arrived in the United States in New York City on 21st December 1909. His friend and fellow artist Charles Dana Gibson met him as he arrived and helped establish Hoffbauer in the New York art community.  On 8th August 1914, he returned to France and, although he had met his military service obligations, he was a Reservist in the French Army.   He enlised in the 274th Infantry Regiment at a Private.

While in the trenches, Charles wrote an article for Leslie’s "Illustrated Weekly", entitled “Horrors of Trench Life in France.”  He served as an official war artist and also worked as a liaison officer between the Camouflage Section of his unit and the American camouflage unit. He was promoted to the rank of Sergeant and was awarded the Croix de Guerre for bravery during the Battle of the Somme.

Frank Leslie's Illustrated Newspaper, later renamed Leslie's Weekly, was an American illustrated literary and news magazine founded in 1855 and published until 1922. It was one of several magazines started by publisher and illustrator Frank Leslie.

Throughout its existence, the weekly provided illustrations and reports — first with wood engravings and daguerreotypes, later with more advanced forms of photography — of wars from John Brown's raid at Harpers Ferry and the Civil War until the Spanish–American War and the First World War.

Born in Cambridge, Massachusetts, USA on 14th October 1894, Edward Estlin Cummings attended Harvard University and graduated with a B.A.. in 1915 and an M.A. in 1916.

Edward served as a volunteer ambulance driver in France with the Norton-Harjes Ambulance Corps, American Red Cross, during The First World War. Edward was imprisoned for three months in a French detention centre, having been mistaken as a spy. He went on to serve in the United States Army (1918-1919), then studied art in Paris (1920-1924).

e.e. cummings was his preferred style of writing his name.
Posted by Lucy at 3:08 AM

With thanks to Josie Holford for the discovery of this artist 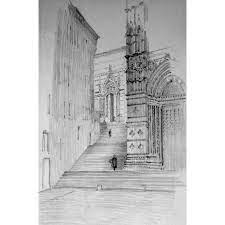 Christopher was taught painting by his father, Wyndham Hughes, who was an expert in stained glass and ecclesiastical art.   In 1904, Christopher married Edith Hereford Wynne Willson in Witney, Oxfordshire.

During the First World War, Christopher served as a Captain in the 7th Battalion Wiltshire Regiment and was awarded the Military Cross in 1917 while serving as a Temporary Captain.  With the rank of Major when he left the Army, Christopher served in the Officers Training Corps (OTC) at Marlborough College in Wiltshire, where he taught art from the 1920s – 1940s.  His final rank was Colonel.

have  not been able to find any WW1 artwork or a portrait of Christopher.  If you can help please get in touch.

Born in Walmer, Kent, UK on 21st May 1868, John's parents were Christopher Clarke Hassell a Royal Naval Officer,. and his wife, Louisa Sparkes.
Educated in Worthing at Newton Abbot College before going on to Neuenheim College, Heidelberg, Germany, John emigrated to Canada with his brother Owen in 1888, after failing to gain entry to Sandhurst Military Academy . He returned to London two years later when he had drawings accepted by the “Graphic” a British weekly illustrated newspaper. At the suggestion of Dudley Hardy (along with Cecil Aldin, a lifelong friend), he went to study art in Antwerp and Paris. During that period he was influenced by the famous poster artist Alphonse Mucha.

In 1895 John began working for David Allen & Sons designing advertisements, which developed into a 50-year career. He also produced a large number of volumes of fairy tales and nursery rhymes.

In 1900 he opened his own New Art School and School of Poster Design, in Kensington, but the school had to close at the outbreak of the First World War. 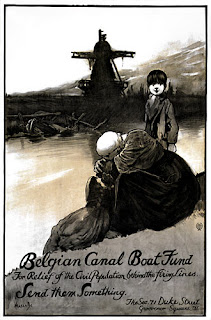 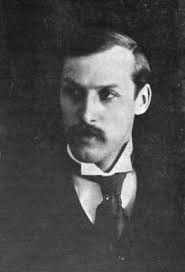 Arthur was born on 25th December 1870 in Bodalog, near Betws-y-Coed, Wales, the second son of Captain Francis Sandys Dugmore and his wife, Emily Evelyn, a daughter of William Brougham, 2nd Baron Brougham and Vaux.  His father served in The Queen's Own Rifles of Canada before his birth, and later in the 64th Regiment of Foot.

Educated at Elizabeth College, Guernsey, and later in Kadıköy and Bournabat (in modern day Turkey), Arthur went on to study art at the Instituto di Belle Arti in Naples, Italy and went to America in 1889. In 1901 he married  Henrietta Louise Watkins, and the couple had three children.

Forty two years old when the First World War began, as a civilian photographer Arthur travelled to the Western Front and began recording with his cine camera, as the Belgian army attempted in vain to stem the advance of the German Army.

Influential friends helped Arthur "to obtain a commission in an infantry regiment — the King's Own Yorkshire Light Infantry" -The 'Tykes'.   Arthur served in the trenches during the period leading up to the First Battle of the Somme but before the Battle he was gassed and unfit for duty. He wrote from the front lines during this period describing trench warfare, the Somme attack and its consequences and aftermath.

Arthur recorded his WW1 eye-witness experiences in a book entitled “When the Somme Ran Red: The Experiences of an Officer of the King's Own Yorkshire Light Infantry During the First World War.”

Arthur later created a number of paintings based on his recollections of experiences on the Somme. 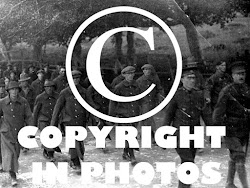