Victoria Monkhouse (1885 – 1970) - British Artist and illustrator, possibly best remembered for her illustrations of women working on the Home Front in Britain during the First World War.

Louisa Victoria Monkhouse was born on 24th May 1885 in Barton, Chesterton, Cambridgeshire
Her parents were Alfred William Monkhouse, an Anglican Church Minister, and his wife, Mary Eliza Monkhouse, nee Stuart, who was from Canada.   Louisa had the following siblings:  Mary Violet, b. 1877, Alf Cyril Delopope, b. 1878, Mabel Agnes, b., 1879, Ellen Janet, b. 1882.

During the First World War the sisters all helped the war effort - Mary Violet worked as a Red Cross Nurse, Mabel Agnes, worked in Ordnance in Coventry, Ellen Janet was a VAD  nurse and Victoria worked as a canteen worker.

Following the establishment of the Imperial War Museum (IWM) in London during the First World War, a decision was made to record the contribution women were making to the war effort.  Writer and explorer Agnes Conway, daughter of the first honorary Director-General of the IWM, was appointed to organise and lead the Museum's newly created Women's Work Sub-Committee.  Agnes contacted Victoria Monkhouse and commissioned her to produce a series of sketches and watercolours showing women working in the jobs left vacant by men who were serving in the forces. Victoria produced a series of paintings, showing women working as bus conductresses, drivers, window cleaners and in a wide variety of other exclusively male roles. 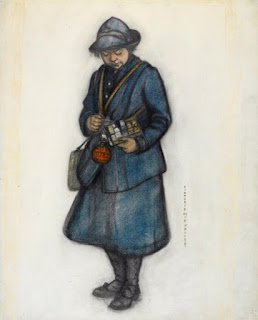 After the War, Victoria exhibited her work in various exhibitions during the 1920s.
In 1939 Victoria lived with her sisters – Mary Violet, who was also an artist, Mabel Agnes and Ellen Janet - in Eton, Buckinghamshire.  Victoria died in 1970. 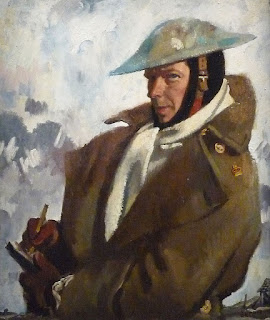 I appreciate that Orpen is one of the most famous War Artists of the First World War, but his career as a war artist on the Western Front is not that well documented.

Born in Stillorgan, County Dublin, on 27th November 1878, William Orpen was the fourth and youngest son of Arthur Herbert Orpen (1830–1926), a solicitor, and his wife, Anne, nee Caulfield.  Both his parents were amateur artists, and his eldest brother, Richard Caulfield Orpen, became a notable architect. William was a naturally talented painter and shortly before his thirteenth birthday his parents enrolled him in the Dublin Metropolitan School of Art. During his six years at the college, William won every major prize.

In 1901, William held a solo exhibition at the Carfax Gallery in London.  That year, he married Grace Knewstub, the sister-in-law of the artist Sir William Rothenstein. They had three daughters but the marriage was not a happy one and, by 1908, William had begun a long running affair with Mrs Evelyn Saint-George, a well-connected American millionairess based in London

During the First World War, William was the most prolific of the official war artists sent by Britain to the Western Front. Although he was made a Knight Commander of the Order of the British Empire in the 1918 King's birthday honours list, and also elected a member of the Royal Academy of Arts, his determination to serve as a war artist cost him both his health and his social standing in Britain.

In December 1915, William was commissioned into the Army Service Corps and reported for clerical duty at London's Kensington Barracks in March 1916. Throughout 1916, he continued painting portraits, most notably one of a despondent Winston Churchill. In January 1917, the “Daily Mirror” reported that Field Marshal Douglas Haig himself had "conferred" on William the title of Official Artist with the British Army in France. The other artists on the Department of Information War Artist scheme had the honorary rank of second lieutenant and were restricted to three weeks visiting the Western Front, whereas, William was promoted to the rank of Major and given indefinite permission to remain at the Front. An officer from Kensington Barracks was appointed as his military aide, a car and driver were made available in France and Orpen paid for a batman and assistant to accompany him.

When the war ended the Imperial War Museum commissioned William to remain in France and paint three large group portraits of the delegates to Paris Peace Conference. He moved to Paris in January 1919 to begin work on his next commission and during 1919 painted individual portraits of the delegates to the Conference which formed the basis of his two large paintings, “A Peace Conference at the Quai d'Orsay” and “The Signing of Peace in the Hall of Mirrors”.

William considered that the whole conference was being conducted with a lack of respect or regard to the suffering of the soldiers who fought in the war and he attempted to address this in the third painting of the commission. This picture was to show the delegates and military leaders as they entered the Hall of Mirrors to sign the Treaty of Versailles.

After the war William returned to painting society portraits and enjoyed great commercial success. In May 1931, he became seriously ill and, after suffering periods of memory loss, died aged 52 in London, on 29th September 1931. William was buried in Putney Vale Cemetery. A stone tablet in the Island of Ireland Peace Park Memorial, Messines, Belgium, commemorates him.

Although Sir Alfred Munnings is very famous - perhaps best known for his paintings of horses - I did not know he was a WW1 artist. 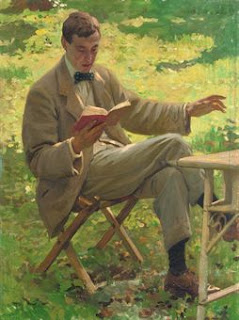 Alfred Munnings was born on 8th October 1878 at Mendham Mill, Mendham, Suffolk, across the River Waveney from Harleston in Norfolk. His father, John Munnings, was the mill owner, and his mother was Ellen Emily, nee Ringer. Alfred had the following siblings:  William G., b. 1877, Frederick, b. 1881 and Charled E., b. 1885.

Educated at Framlingham College, at the age of fourteen, Alfred was apprenticed to a Norwich printer where he designed and drew posters.  He lost the sight of his right eye in an accident but continued painting. In1899 two of his pictures were shown at the Royal Academy Summer Exhibition.  He was associated with the Newlyn School of painters, and in Cornwall met Florence Carter-Wood, a young horsewoman and fellow artist. They were married on 19th January 1912 but Florence attempted suicide while they were on honeymoon and died in 1914.

Alfred volunteered to join the Army when war broke out but was unfit for active service.  He was put in charge of processing Canadian horses destined for France.  Alfred was then posted to one of the Remount Depots on the Western Front, where he was employed as a war artist to the Canadian Cavalry Brigade, under the patronage of Max Aitken. During the war Alfred painted many scenes, including a portrait of General Jack Seely mounted on his horse Warrior in 1918 (now in the collection of the National Gallery of Canada, Ottawa). He also painted the Charge of Flowerdew's Squadron in 1918, in what became known as "the last great cavalry charge" at the Battle of Moreuil Wood.

The Canadian Forestry Corps invited Munnings to tour their work camps, and he produced drawings, watercolors and paintings, including Draft Horses, Lumber Mill in the Forest of Dreux in France in 1918. The extent to which horses were used during WW1 is under-reported but horse fodder was the single largest commodity shipped to the front by some countries during the conflict.

In 1920, Alfred married Violet McBride. After the war, he began to establish himself as a sculptor. He was taken on by Lord Beaverbrook's Canadian War Memorials Fund and was given several prestigious commissions after the Great War.

His first public work was the equestrian statue of Edward Horner in Mells, Somerset, a collaboration with his friend Sir Edwin Lutyens, who designed a plinth for the statue.

Alfred was elected president of the Royal Academy of Arts and was made a Knight Bachelor in 1944. In the 1947 New Year Honours List, he was appointed a Knight Commander of the Royal Victorian Order.

Alfred died at Castle House, Dedham, Essex, on 17 July 1959. After Alfred's death, his wife turned their home in Dedham into a museum of his work. The village pub in Mendham is named after him, as is a street in the town.

Note: The Army Remount Service was the body responsible for the purchase and training of horses and mules as remounts for the British Army between 1887 and 1942.

Portrait of Alred in 1911 by Harold Knight. 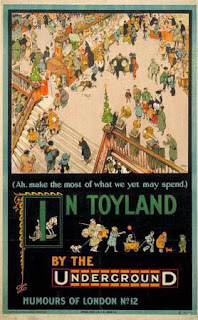 “For Christmas 1913, Sarg produced a poster called ‘In Toyland’ representing a scene of gift-buying frenzy. Children clamber on the floor with toys in hand, and rotund gentlemen struggle to carry their spoils. Despite Sarg’s gentle mockery of London’s materialism, there is a festive, joyful exuberance to the poster.

12 months later, the country was at war. In 1914 Sarg duly produced a topical version of his ‘In Toyland’ poster of the previous Christmas. The image in the top half was identical to the original, but the text and characters in the lower half were altered. "

Featured - both posters for comparison.  With thanks to Debbie Cameron. 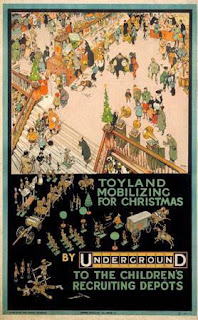