With thanks to Historian Debbie Cameron of the Facebook Page https://www.facebook.com/groups/1468972083412699/ for posting the link to one of Nellie Isaac's paintings that set me off researching Nellie.

Nellie was born in 1886 and grew up in Hampstead, London, UK. Her Father was Percy Lewis Isaac, a naval architect and marine engineer with ship telegraph cable laying patents to his name. He was the son of the Liverpool ship portraitist and lithographer John Raphael Isaac. Nellie’s Mother was Florence Maud Isaac, nee Alexander. Nellie had a sister, Rose Amelia, and a brother, John Robert.  In 1901 the family lived at 20 Dennington Park Road in what is now London NW6.  By the 1911 Census, Nellie and her sister were both still living at home and listed as artists.

In 1904 Nellie had two watercolors “A Florentine” and “La Blonde” at the Royal Academy. In 1906 she won a second prize for “Providence and the Guitar”.

She set up shop with her sister Rose with premises at Eastgate Street in London’s west end. Before The First World War, Nellie exhibited her paintings at the Royal Academy and elsewhere.

During the First World War, Nellie and Rose Isaac gave up their art and design business and for two years they worked at Gordon, Watney and Co in Weybridge in order “to do something that we felt would be of national importance”. Gordon Watney & Co. Aeronautical Engineers of Weybridge were a large engineering works near Addleston that specialized in stripping-down and repairing cars and lorries.

When war broke out, Gordon Watney was appointed by the War Office to form a Mechanical Transport Supply Column within the Army Service Corps (MTASC), Home Counties Division afterwards attached to the 29th Division.  He turned part of his factory into a drill hall and urged men – including his employees – to enlist. He enrolled over 250 men in “Watney’s Lot” aka “Watney Boys” who served as mechanics and drivers. On 7th November 1914, the ‘Watney Boys’ marched to St James’s church, Weybridge, for a farewell sermon before posting to Egypt and Salonika and to the Dardanelles.

Gordon Watney came from the famous Watney brewing family. He was a pioneering racing car driver and entered events at Brooklands Race Track. Before the war he was also dealer and rebuilder who specialized in remodeling high-quality motor cars.

One of their products was the Type Z7 Clerget-Blin rotary aero engine designed by Pierre Clerget in France in 1911. Clergets were one of the more common engines in use during WW I and were fitted to a number of aircraft including the Avro, Beardmore and the Sopwith Pup.

Contemporary newspaper accounts report that Gordon Watney built a theater in the works canteen and that he often directed and performed in plays.

When the Imperial War Museum came into existence in 1917, Agnes Conway – the daughter of the honorary director Sir Martin Conway – was invited to form a Women’s Work Sub-Committee.
Nellie Isaac contacted Conway asking if she could contribute to the effort. The committee offered her a guinea (£1. 1s. 0d – equivalent to about £210 in 2018) for each painting. Nellie was eventually able to negotiate a better rate.

After the war, Gordon Watney returned to his sports car business and Nellie and Rose Isaac went back to their illustration and design business in London. In 1934 the London post office directory list the business of the Misses N.E. and R.A. Isaac as follows:  ‘decorative artists at 26 Wells Street, Fitzrovia’.  The sisters had premised behind Oxford Street in London’s West End. Newspaper accounts in the 1930’s say that Nellie held art exhibitions organizing art exhibitions and that she invented 'an eggshell veneer' paint.

The sisters lived for a time at Rugby Mansions in Marylebone, before moving to Bramham Gardens, Earls Court where they lived with their mother until her death in 1938 and then for the remainder of their lives.  The girls' brother Robert emigrated to Canada when he was still in his teens.

Travel records demonstrate that the sisters travelled fist class to Mombasa in 1949 and to Madeira in 1953.


Paintings by Nellie Isaac during WW1:

“Behind The Scenes in the Canteen Theatre - Waiting in the Wings” at Gordon Watney & Co., Aeronautical Engineers, Weybridge.  This painting depicts costumed women in the theatre wings, waiting to go on stage. Two men stand to the left, one holding a black cat prop by the tail.

“Receiving the News of the Armistice, November 11th 1918”

“Revels at the Victory Ball Given at the Canteen”: Ink and watercolor 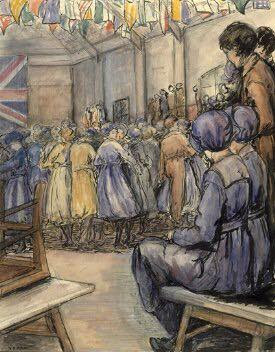