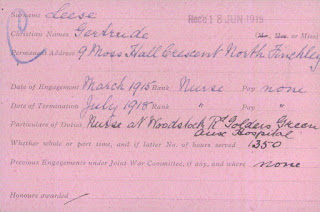 “During the First World War, Leese volunteered in the Voluntary Aid Detachment (VAD) at Etaples, in an Allied military camp that had many hospitals on site. The Imperial War Museum holds five sketches Leese made while there, which she donated to the museum in 1954. These delicate, dynamic ink-on-paper illustrations give us a glimpse into life on a busy wartime base.

During the first decade of the twentieth century she illustrated a number of books for George Bell and Sons, including George Sand’s La Mare au Diable and François le Champi in 1908, and Daniel Defoe’s Robinson Crusoe in 1909. Her name is credited in substantial type on the covers and title pages of these books, and each includes a generous mix of black-and-white line illustrations and coloured plates. She had studied with Max Bohm (1868-1923) at the international art colony in the fishing port of Etaples, and her work was shown at the ‘Salon des Artistes Français’ in Paris in 1902.

Leese was friends with many artists of the time, including Wyndham Lewis (1882-1957), co-founder of the Vorticist movement, and Helen Saunders (1885-1963) and Jessica Dismorr (1885-1939). Along with Lewis and others, Saunders and Dismorr both signed the original Vorticist manifesto in 1914 and they are depicted in William Roberts’ 1961 painting, held in the Tate, The Vorticists at the Restaurant de la Tour Eiffel: Spring 1915 (the restaurant was in Percy Street, London). Leese was also close friends with her second cousin, Catherina Dawson Giles (1878-1955), known as Kathie, another painter who knew this group.

In 1924 Leese, then in her fifties, studied at the Académie de la Palette in Paris, where Dismorr had studied earlier in 1910-13. Subsequently she sketched and painted many other European scenes, including a number of the French Riviera and the Mediterranean. But it is the immediacy of these simple wartime sketches that are particularly poignant, as they are such a clear and vivid reminder of the people involved in that challenging and harrowing time of more than 100 years ago.”

If anyone has a photograph of Gertrude, please get in touch.