With thanks to Historian Debbie Cameron for telling me about Walter and thanks to Walter’s cousin, Philip Spradbery, who has a lifelong passion for painting, who kindly supplied additional information and to Sergio Sbalchiero for finding paintings by Walter. 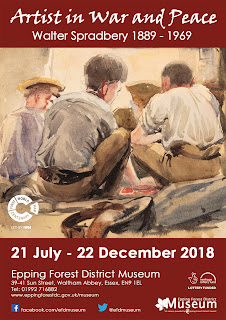 Walter Ermest Spradbery was born on 29th March 1889 in East Dulwich, London, UK. His parents were Joseph Spradbery and his wife Emily Spradbery, nee Feltham.  Walter had a brother, Charles V., b. 1879.

Walter studied at Walthamstow Art School, then worked as an art teacher. He regularly exhibited his work at the Royal Academy. His main artistic media were water colour, linocuts and poster design. Walter designed posters for London transport companies and for British Rail.

During the First World War, Walter, who was a pacifist, joined the Royal Army Medical Corps and served as a medical orderly and stretcher-bearer on the Western Front. He served with 36 Field Ambulance during the Somme Offensive in 1916 and was Mentioned in Despatches several times for bravery rescuing wounded men under fire.   He was awarded a Distinguished Conduct Medal.

"Hostilities ceased on all fronts at 11 o’clock today. Oh happy mothers, happy sweethearts, happy wives, whose loved ones will come safely back... and those lone souls who have lost their very own; today is too unkind to them - how can they face our joy? 'Peace on Earth, Goodwill towards men' - an unseen choir sings it in our breasts - prompting men to evolve a better world more worthy of our ideals and aspirations. Let us begin."

Walter died in Epping, Essex in 1969. An exhibition of the work of WW1 artist Walter Spradbery was held in 2018 at The Epping Forest District Museum.

A biography of Walter Spradbery’s life and times, "My Dear Jim", has been compiled and published by his son, John Spradbery (Mail order from Elizabeth Spradbery: el.malet@gmail.com)

A poem by Walter Spradbery written in 1915 and kindly supplied by his cousin, Philip Spradbery. 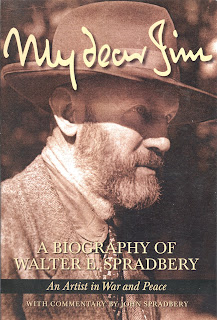 THE BALLAD OF BARNHAM COMMON

“Eyes Have They, But See Not”

The flowers that grow on Barnham’s plain
Are beautiful to see;
The bugloss and the speedwell’s blue
Fair as a summer’s sea,
Blue as a summer’s sky are they
As a child’s eyes may be:

And the tender little pansy’s
Uplifted cherub face,
With golden eye, and purple wings
And unpretentious grace,
Peeps shyly from amid the grass
In every shady place.

But wearily we drag our feet
Over the jeweled sods,
And discipline, it weighs us down
With the curse of an iron rod;
And ‘iron rods’ we carry
To kill the sons of God.

The cranebill’s starry floweret
Is scattered o’er the plain;
Its pale magenta blossoms
We trample in our pain,
And dully long for peace, and love
And our dear homes again.

With iron heels we tread them down,
We tread them in the sand;
We crush their beauty ’neath our feet
Too tired to understand
The ugly ruthless thing we do.
Now war is on the land.

The golden gorse, across the heath
Is a mass of yellow flame;
Its unconsuming fires praise
The Sun God’s glorious name.
But war it burns things black and dead,
And fills men’s hearts with shame.

And scarlet is the pimpernel
And bright the poppy’s red
But brighter still is the blood we’ll spill
Ere we ourselves are dead:
No flower so rich, in the deep dug ditch,
As the blood our guns may shed.

The grass is worn with the ceaseless tread
Of our marching to and fro,
And where we drill on the mossy hill
Great bare patches show;
For ’neath the heel of the War God’s foot
No fair thing may grow.

But time revenges the patient weak
Whom the Ruthless crush and kill,
And delicate things that droop and die,
Like the flowers on the grassy hill,
Will bloom again on another plain
Fairer and sweeter still.

The barren stretch of Flander’s plains
Is desolate and bare,
And the shriek of shell, and stench and smell
Float on the morning air
And splintered stumps are all that speak
Of what once blossomed there.

Yet the flowers our feet have trodden down
Will be born again,
And rich and fine, on Flander’s fields,
Will dance in the gentle rain
Will dance on the dead that feed their roots
The countless, ghastly slain.

The little flowers we’ve trodden down
Will scent each ugly grave,
Will hide the ghastly torn limbs
O the coward and the brave
And gaily smile at the morning sun,
O’er the foolish and the knave.

Oh, the river runs o’er Barnham’s plains
This where our horses drink –
And a thousand fair and charming things
Blossom on its brink.
But we have trod them in the mud
Nor paused to praise or think.

The pinkish purple loose-strife
Bows on the river’s edge,
Forget-me-not and orchids,
The flowering rush and sedge
While briar rose and bryony
Entangle in the hedge.

And crowsfoot gleams on the river,
Like snowflakes in the sun
And sways in the moving waters
That over the pebbles run.
But we cannot pause for such a thing,
Who’re crossing the stream with a gun.

But the rivers which flow in Flanders
Are rivers of blood methinks
And will, one day, colour the roses
Whose roots from that soil drink,
And a thousand flowers will blossom
Where a corpse now rots and stinks.

And we who train at Thetford
Parade on Barnham Hill
And prod coarse sack with bayonets
To gain the skill to kill
To disembowel and mutilate
Men who are brothers still.

While all around is beauty
And overhead the sky,
Where fleecy clouds in freedom float
Over the men that die;
And nature laughs at our folly
As we pass her treasures by.

With a garland of peaceful beauty
She tempts us to lay down our arms;
With a myriad of fearless blossoms
She mocks at our childish alarms,
With a tangle of wonderful flowerets
She seeks to ensnare us with charms.

Oh, he who sees God in a daisy,
Can see more clearly in man,
The light of the Glorious Eternal
That through all Living Things ran,
When the wheels of time first started,
And the Song of Life began.